This Book Is For All Kids, But Especially My Sister Libby. Libby Died.

This Book Is For All Kids, But Especially My Sister Libby. Libby Died. 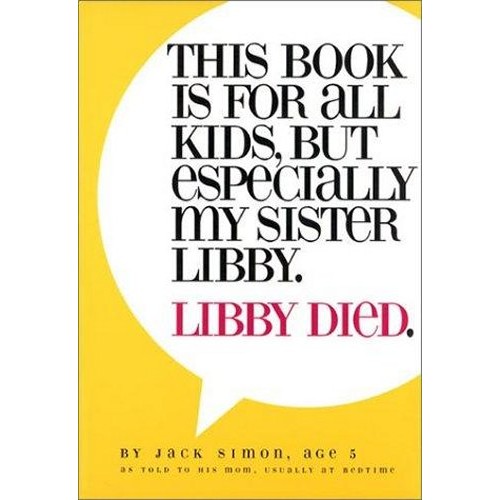 Jack Simon was five years old when his sister, Libby, died. She'd been born with a rare disorder and wasn't expected to survive six months. But she lived three and a half years, giving Jack plenty of time to get to know her. When she died, Jack struggled to understand how God could take away his little sister.

Jack's mom, Annette, encouraged her son to talk about his pain, and she insightfully began a diary. Jack's questions eventually became the picture book This Book Is for All Kids, but Especially My Sister Libby. Libby Died. His words were illustrated with his input by his mom, a graphic designer.

A grieving Jack thought no one in the world could possibly know how he felt. In truth, his questions are universal. Communication is especially important at a time of loss. Ironically, that's exactly when no one quite knows what to say. Not even grown-ups.

Already used nationally in Ronald McDonald Houses and praised by authors, educators, parents, and professionals-including the American Hospice Foundation and the Elizabeth Glaser Pediatric AIDS Foundation-This Book Is for All Kids is a starting point for loving conversations about death, grief, and hope.

Designed for children, this book is becoming a source of comfort for people of all ages and faiths.

Why Did You Die? Activities to Help Children Cope with Grief & Loss
$20.95